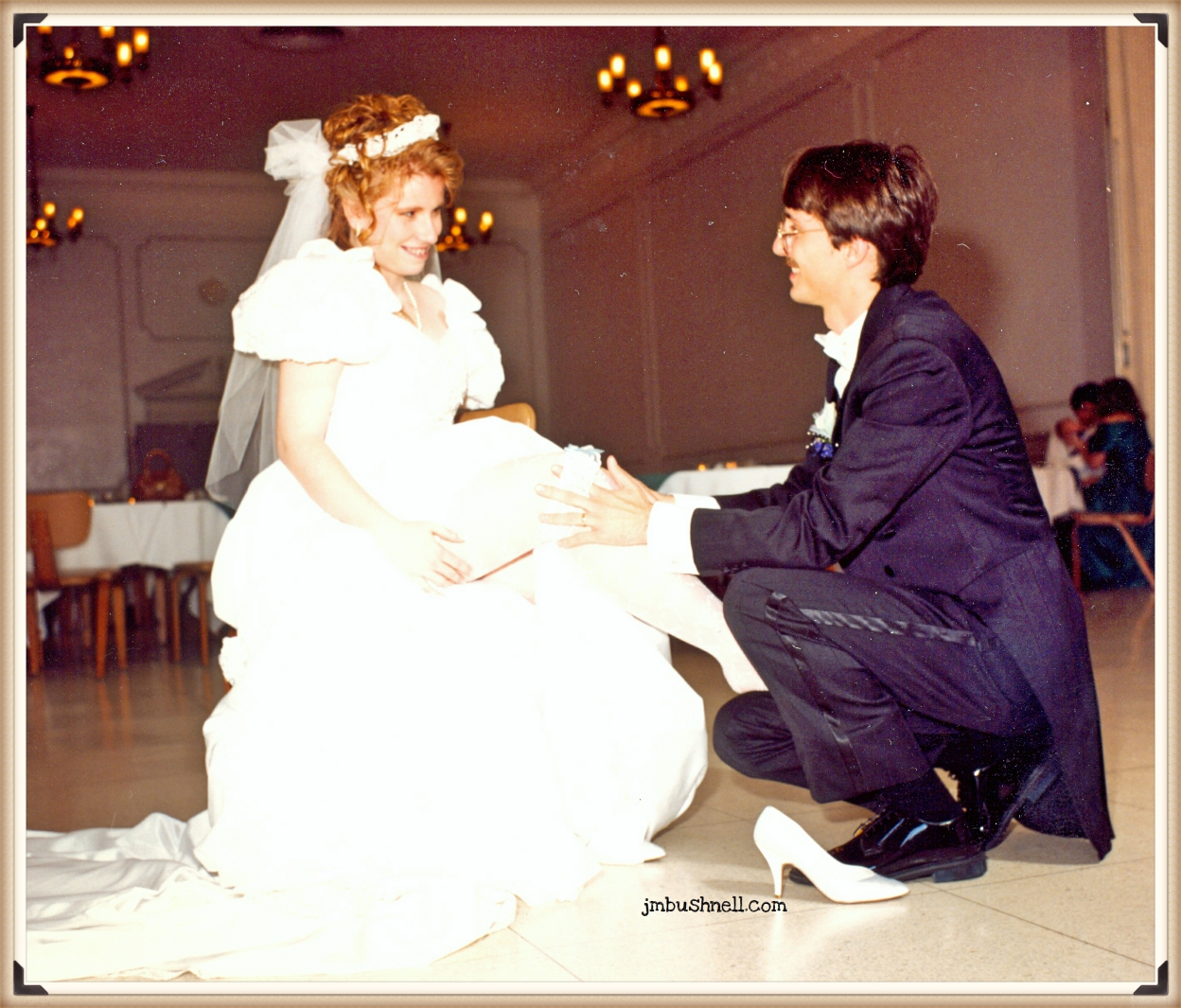 Part Four of my Lucky In Love Series – My True Romance

The first day I walked onto the Texas Woman’s University campus in Denton, Texas, I said I wanted to be married in The Little Chapel-in-the-Woods. I never imagined that day would come in just nineteen months, but it did, and we were married in that beautiful spot.

We were married in March because that is the month in which we met. We married on the 14th because that was one of the few dates that the Little Chapel was available. The 15th was available, but this English major could not agree to marry on the “Ides of March.”

It was storming and pouring down rain the morning of our wedding. The rain stopped just prior to my bridesmaids leading me to the front of the Chapel. As I walked around the side of the Chapel, the sun pushed the clouds aside and shone brightly for the rest of the day.

We footed the bill for our wedding, and the budget was so tight we served only our wedding cake and a groom’s cake at the reception. The only bites we had of our own cakes were memorialized in the traditional “feeding each other” photographs. Hours later, our first meal of the day would be a few packages of peanuts on the plane to our honeymoon.

People let us know exactly how they felt. “You are too young.” “You are throwing away your future.” “You’ll never accomplish your dreams.” “It won’t last.” “Are you pregnant?” “You will regret it.” “Are you sure?” “He isn’t really your type.” “She is awfully young.”

I was told by everyone, including strangers in elevators, not to marry at so young of an age. Everyone told me that the person you are at nineteen is not the person you’ll be at twenty-five or thirty-five. I listened to what they said, but I didn’t let their words destroy what I felt.

We wanted to marry because we were in love with one another. We didn’t want to wait another minute to begin our life together as a family.

Those concerned people were right; we aren’t the same people we were when we married. What they didn’t count on was our recognizing that marriage is hard work, and we vowed to always show up to our marriage the way an employee shows up to work. We show up every day and put the required effort in to keep the passion and love alive. We’ve grown together as a couple, never leaving the other behind. This is what works for us, and it is the reason we’ve lasted this long.

I can’t imagine what the road ahead has in store for us, as I never could have anticipated  a moment of the time we’ve shared. I hope to live the rest of my days happily married to my best friend. The realist in me knows this may not be the case. Life is full of surprises, and the road we travel on this journey is bumpy and full of potholes. Anything can throw your world out of alignment. As the woman who has successfully weathered many a storm while holding her best friend’s hand, I believe that the two of us can make it through just about anything.

There isn’t anything we cannot achieve together. We are a team. A unit. A family. Fur and feathers included.

Happy Anniversary, Loren. I love you. I’m happy to partner up with you for another nineteen years.

March 15, 2014 – A new starting point in my life, as I’ve been with this one person longer than I existed without him. No one is more surprised than I am.

Read the previous posts in the Lucky in Love series: 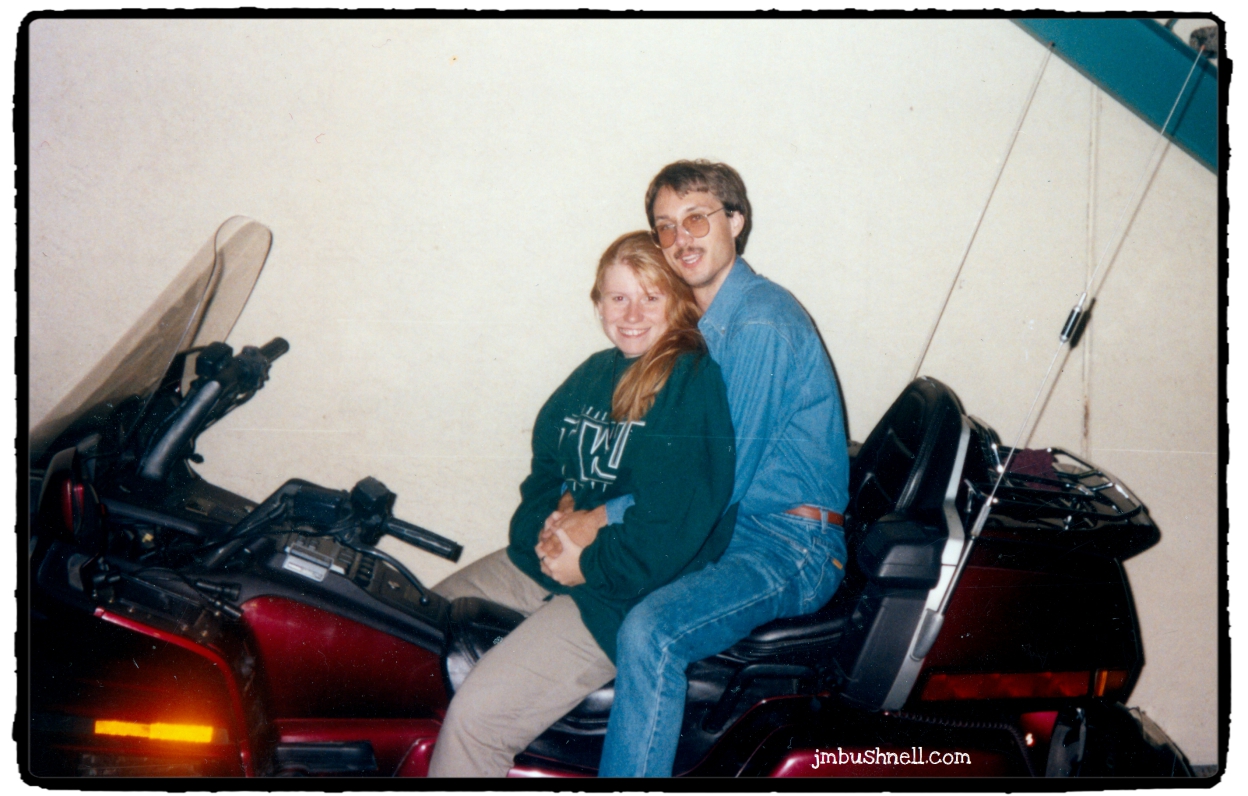 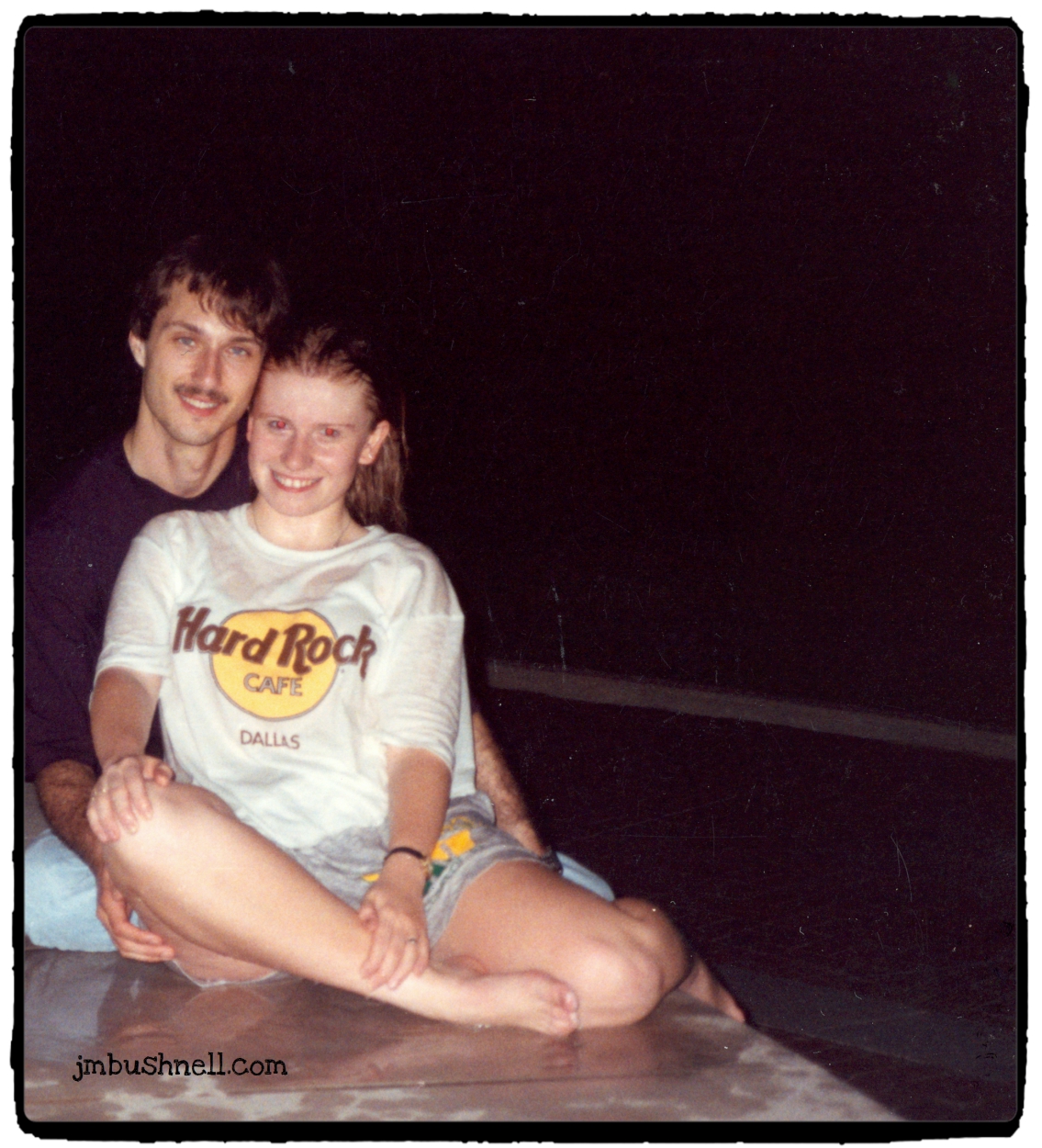 My husband and I met on Internet Relay Chat (IRC). I initially used the system to communicate with my boyfriend who had moved to another city, but I loved talking to people all over the world. I met Loren online when I was bored and sick with both mono and strep throat.

I didn’t have a computer in my dorm room. In order to get online, I either had to go across campus to a computer lab or reserve a computer in the lab on the bottom floor of my dorm. There wasn’t a simple button to click and connect to the internet, either. I learned how to create a virtual terminal connection with other computers and use IRC. It was a complicated process that I shared with my friends. The once empty computer stations were now constantly in use; my friends were all reserving computers to talk to people across the globe.

Once I started using the computer to chat on IRC, I was hooked.

After three months of having only talked online and on the phone, Loren drove from Illinois to Texas to meet me. He’d sent me a photo of himself, but I wouldn’t send him a photo of me. He decided to stop waiting on me to send a photograph, and he came to see me in person. The first time I laid eyes on him, I felt as if I’d known him my entire life. There were no awkward moments, as we truly had become very good friends.

Five minutes after he’d left on his return trip to Illinois, I told my roommate that I knew I’d just spent three days with the man I would one day marry. Just before he reached the interstate entrance ramp, he stopped at a payphone to call and tell me he didn’t want to leave.

Read the next part in the Lucky in Love Series:

Categories: Getting to Know Me, Personal Essays
Tags: love, marriage, romance
Get Social With Me!
Subscribe to Blog via Email
Don’t Miss A Word…
Sign up for my "Official" newsletter. I don't always send out a newsletter, but when I do... you won't want to miss it. Sign up!
Purchase Manual Exposure